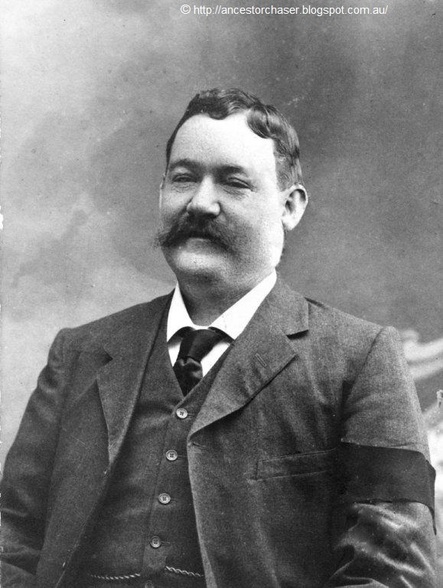 Essendon Gazette
"The death of Mr. Morgan".
Much regret has been publicly expressed regarding the death of Mr. J.F Morgan of the Cross Keys Hotel, who was popularly esteemed as a genuine sportsman, and one always ready to do a kind turn to a fellow creature.  The deceased will be much missed in the district.  He was born in the Cross Keys Hotel, which was kept by his late mother for upwards of half a century."


"Sad drowning Fatality"
A shocking case of drowning in which Mr. John Morgan, aged 36 years, licensee at Essendon of the Cross Keys Hotel, Pascoe Vale Road, was reported to the North Essendon Police on Thursday afternoon.
The matter was inquired into by Dr. Cole, district Coroner, on Friday, at the hotel in question.  Evidence was given by James O'Meara, brother in law of the deceased, and Louis Peters, an engineer, that they were repairing a pump on the afternoon of Thursday 28th February, when they found a table knife in the piping.  The knife was very much rusted, and deceased expressed his surprise at it being found in the piping, stating that it must have got there before he was born.  The two men went to a buggy shed near by to find a nut to afix to the pump, leaving deceased in the locality of the tank,  which was about 17 feet deep and contained 15 feet of water and had a round opening at the top.  They were about some five or six minutes, and before they got back to the tank, a girl named Celia Holland called out in an excited state to them that Mr. Morgan had been looking into the tank and had fallen in.  They looked about for a rope but could not find one.  A resort was then had to a lad﻿der, and this was put down the tank, but was found to be not long enough.  A large piece of quartering was next got and put across the tank, and the ladder was fastened on to it, down the tank.  O'Meara descended by this means, and the two men quickly got deceased to the surface but by this time life was found to be extinct, although Dr. Dickenson and Thomson, who were quickly on the scene, tried by all means to restore life.  It was thought that Mr. Morgan, who was very short sighted, was looking into the tank and accidentally fell in
Senior Constable Gorman gave evidence that he had for a long time known deceased who was in comfortable circumstances, and he knew of no reason why he should take his own life.
The coroner having summed up the evidence, returned the verdict to the effect that deceased was found drowned, there being no evidence to show how he got into the water.
The late Mr. Morgan, who leaves a widow but no children, was buried in the Melbourne General Cemetery on Saturday." 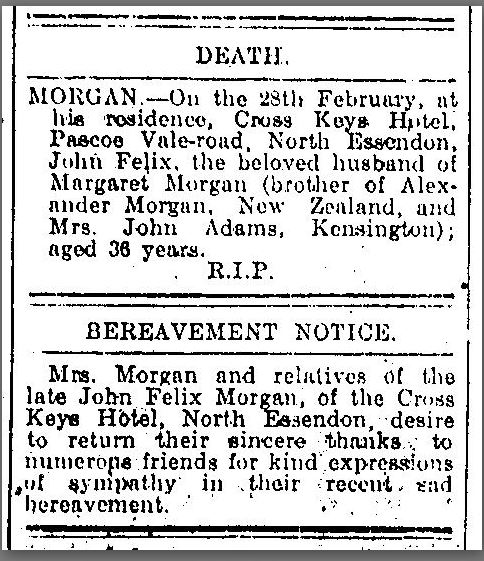 an Inquisition for our Sovereign Lord King Edward V11., taken at North Essendon in the State of Victoria, the 1st day of March A.D. 1907 in the seventh year of the reign of our said Lord the King, by me, Robert Hodgson Cole, gentleman, a Coroner of our Lord the King for the said State, upon the view of the body of John Morgan then and there lying dead.

Having inquired upon the part of our Lord the King when, where, how, and by what means the said John Morgan came by his death, I say that on the 28th day of February 1907at Essendon North at the Cross Keys Hotel John Morgan was drowned in a tank.  From the evidence it is possible that the occurrence was accidental.

Essendon North Station Melbourne Police District 28th February 1907.
Report of Senior Constable Gorman relative to A Death by drowning.
I have to report that at 6.10 pm this evening I received information that John Morgan - Licensee of the Cross Keys Hotel at Firebrace St. North Essendon was drowned  in a tank in the yard of the Hotel at about 6 pm. I proceeded to the place and when I arrived there the body was out of the water and there were several persons around the body and all restorative means were used but without effect.  Drs Thomson and Dickinson arrived and they examined the body and both pronounced life extinct.
The deceased was married and was about 36 years of age.
It appears that two men named respectively James OMeara - Deceaseds brother in law and Louis Peters were doing some repais to the pump in the yard and deceased was instructing the men what to do.  Both men left the spot where they were working and went to a shed close at hand to get a portion of the pump that was said to be in the shed.
P Gorman S.C.

CORONER'S INQUEST
Victoria to Wit
This Deponent Margaret Morgan on her oath saith I am a widow residing at Cross Keys Hotel North Essendon.
The deceased John Felix Morgan was my husband.   He was 36 years of age.  He was licensee & owner of this Hotel.  He has been here all his life.  His mother was licensee before him.  I have been married eight years,  I last saw him alive in the evening of 28.2.07 here.  He was standing at the passage door at the back of the hotel looking at two men ........... to the pump.  He was in very bad health. He was attended by Dr. Dickinson recently.
He spit up some blood yesterday morning. He was in bed until 4 pm.  He has been in bad health since May last. He was affected with near sightedness.  He was subject to fainting fits.  He had one yesterday.  He has left a will ? ? ? back when he was very ill.  The doctor had told him there was little hope for him.
signed Margaret Morgan


CORONER'S INQUEST
Victoria to Wit
This deponent James OMeara on his oath saith I am a carpenter residing at 114 Napier Crescent Essendon.
I was doing some work here yesterday for deceased.  He was my brother in law.  about 6 -7 pm I went to work at the pump of the tank in the yard.  Peters was present﻿

Mary (Molly) Eleanor Daly was a family friend and lifelong friend of Margaret Morgan nee O'Meara.
She  was living at the Cross Keys Hotel when Alice Morgan died.  She must have been a close friend as Alice Morgan left her ten pounds in her Will. From the Vic BMD indexes, Mary's parents were James Daly and Ann Mullany or Maloney.  Molly is buried in Area K at Keilor Cemetery.