Cornelius Kelly, born about 1790 to 1800
possibly in Dualla, Tipperary, Ireland and Mary Mulloughney/Moloughney were married by Rev William Kirwan on the 6th of February 1834 in the Parish of Boherlahan Dualla, Tipperary.

Witnesses to the marriage were Daniel D. Corcoran and Daniel Mahony

The Kelly family were of Roman Catholic denomination.

The surname Mulloughney has many variations in spelling.
Mologhny/Molloughney/Mulloughney/Moloney/Maloney etc etc

This excerpt from Volume 1 "IRISH FAMILIES - Their Names, Arms, and
Origins” by Edward MacLysaght gives an outline of the background for the name MOLOUGHNEY.
"O'Molony (Maloughney), Molony or Moloney is O'Maoldhomhnaigh in Irish, which
denotes descendant of a servant of the Church. It is seldom if ever found to be with the original
prefix "O” though it is 100 percent Gaelic and no similar name is to be found in England.  Molony
is a Dalcassian Sept belonging to Kiltanon near Tulla in East Clare, where they are very
numerous today, though also found in equal numbers in the adjoining Counties of Limerick and
Tipperary. An interesting example of the vagaries of Irish nomenclature is afforded by this
name Molony. Some families in Northern County Tipperary now called Molony are not
O'Maoldhomhnaigh but O'Maolfhachtna which however is also in rare cases anglicized as Maloughney
thus giving the impression that it is a “Mac" and not an “O” name.”

I found a post in the Rootschat.com Tipperary forum dated June 2016 that stated:-

"I don't have any precise details unfortunately but there was a priest at one time who refused to acknowledge there was a surname "Moloughney".  Said they should be McLoughlins.  It was from a Moloughney that I heard this. All this priests "Moloughney" baptisms were registered by him as McLoughlin!"

Cornelius and Mary Kelly had 6 children
From Parish Register Baptisms

Alice's father's death may have been the reason for her migrating to Australia
some time in the early 1850s.  I have not yet found any information on her mother, Mary nee Moloughney, so I don't know where the younger boys lived between their fathers death and their migration to Australia in 1858.

He arrived in Australia in about 1897 only six months before his death of TB.
Did he go to South Africa directly from Ireland or, like his brothers, did he come to Australia first and then head to South Africa?

The three younger brothers arrived in Australia on the 15th June 1858 on board the ship Rising Sun.
They had arrived just in time for their older sister's wedding on the 30th of June that same year.

It is hard to imagine such young boys traveling so far alone.

There was also a Patrick Kelly on board the Rising Sun,  his age was 21.

Was he perhaps an older brother?  No Baptism record found for him.

Kelly's on the Rising Sun passenger list
I found a Cornelius Kelly in that area for the correct time frame.

There was a John Kelly of Ballyherberry
I don't yet know of a connection to him.
Also at Ballyherberry were 2 Thomas Bergins and a Thomas Bergin at Ballinree.
A Nicholas Bergin was witness to Michael Kellys will in Essendon Victoria in 1898.
Living att Ballinree was also a Patrick Power.
A Frederick Power was a witness for John Morgan's will in Essendon, Victoria in 1880.

So perhaps the Kellys, Bergins and Powers, all in Essendon, knew each other back in Ireland.

In 1850
County Tipperary
Primary Valuation of Tenements
by Richard Griffith

Cornelius Kelly was leasing house, office and land from M Pennefather at Fussough.

In 1851
Notice of the sale of RENTAL of PORTIONS OF THE UNSETTLED ESTATES of MATHEW PENNEFATHER, ESQ., situate in the County of Tipperary To Be SOLD BY AUCTION

In this document there were details for the 'Late Cornelius Kelly'
His land being classed as 'Yearly Tenancy, terminable 1st November in each year'. 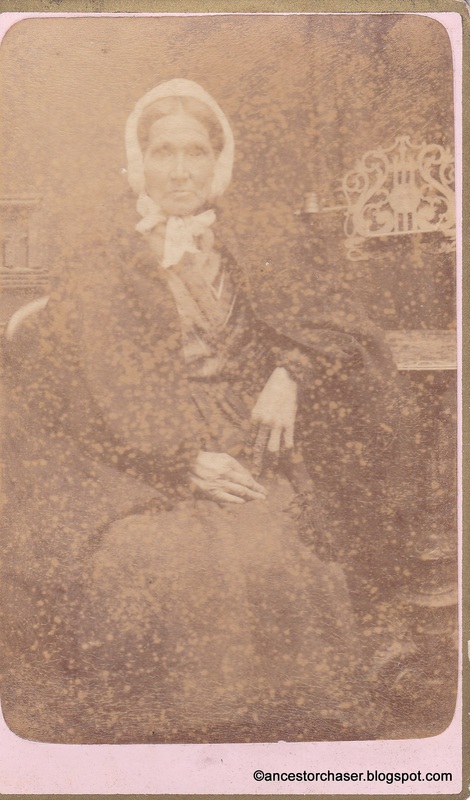 The above photo of Mary KELLY nee Moloughney courtesy of Mary Sabina Stacey who is also a ggg granddaughter of Mary.  The photo was in the posession of Alexander Morgan, grandson of Mary KELLY.  The back of the photo shows it was taken at Cashel, Tipperary by Photographic Artist, Joseph O'Ryan. 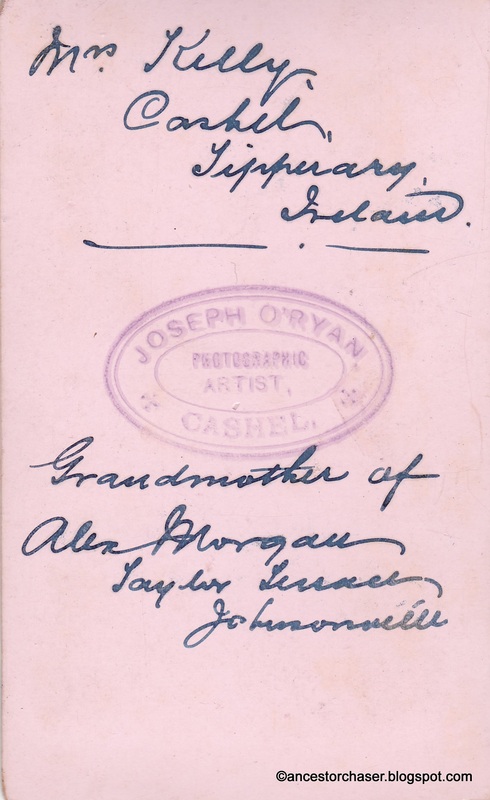