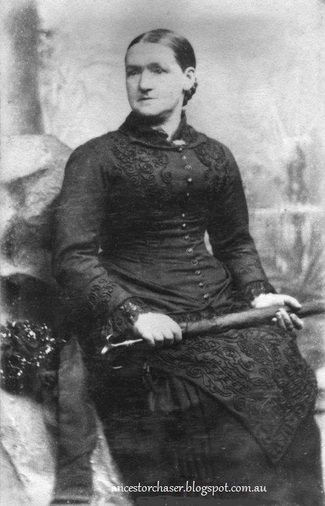 Margaret Kelly, known as Alice was the daughter of Cornelius Kelly and Mary Moloughney​.
​Alice arrived in Australia about 1852.
Her death certificate states she lived 52 years in Australia.

Alice took over the license of the Cross Keys Hotel when her husband John died in 1880. 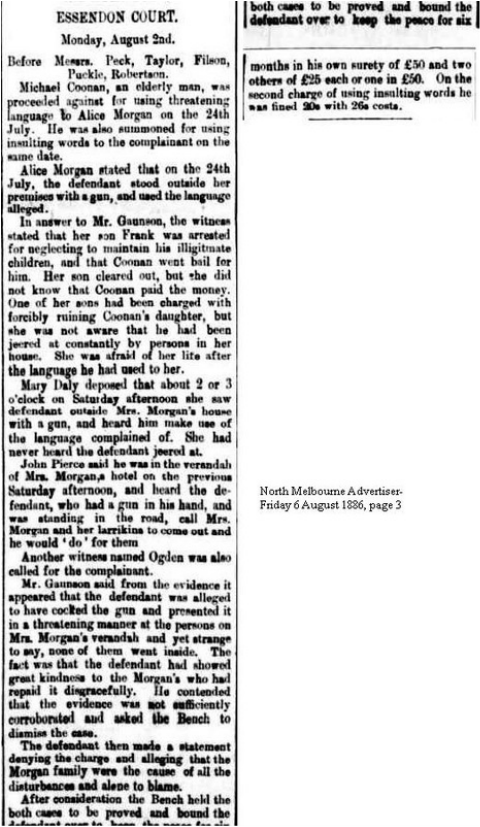 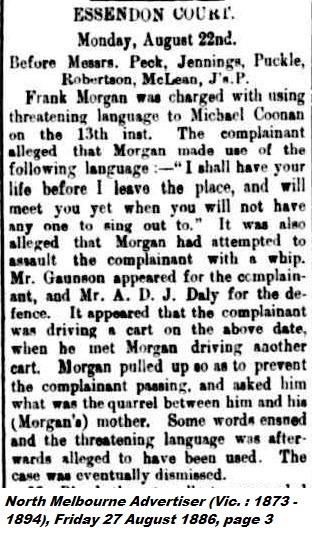 Information from the Will of Alice's brother,  Michael Kelly,  indicates that there were 2 more brothers in the Kelly family living in Australia.
One was a John Kelly who had a daughter Alice.
In 1898, at the time of Michaels death, his niece Alice was living at Melrose Street, North Melbourne.
Another brother mentioned was William Kelly who Michael then believed was of West Australia Mining, a speculator.

New Zealand newspapers, the Wellington Evening Post and New Zealand Tablet, published notices about Alice and John's son Alexander Morgan of the New Zealand Treasury Department receiving news of his mother's death in 1904.  These notices mention yet another brother of Alice, Charles Kelly of Ohariu Valley which is in the North Island near Wellington.  The name in the article should have been Thomas Kelly, not Charles Kelly.  Another article stated Mr Kelly was also present at the wedding of his nephew, Alexander Morgan, in February 1894.

Last Will and Testament of Alice Morgan

This is the Last Will and Testament of me Alice Morgan of the Cross Keys Hotel Firebrace street North Essendon in the Colony of Victoria Widow.
I revoke all Wills heretofore made by me.  I appoint my son John Morgan sole Executor and Trustee hereof.
I give devise and bequeath my freehold estate at Firebrace Street North Essendon aforesaid together with the said Hotel and premises erected thereon and the goodwill and license thereif and all the household furniture plate linen utensils and effects therein (excepting my piano which I hereby bequeath unto my daughter Mary Adams) and all other my real estate whatsoever and wheresoever situate unto my said son John Morgan his heirs and assigns absolutely
I bequeath the sum of ten pounds unto Mary Daly at present residing with me.  The rest residue and remainder of my personal estate I bequeath unto my said son John Morgan his heirs and assigns upon trust to convert the same into money and to hold the proceeds in trust for my sons Alexander Morgan the said John Morgan and my said daughter Mary Adams in equal shares and proportions.  In witness whereof I have hereunto set my hand this twenty first day of August One thousand nine hundred .....
Signed by the said Alice Morgan as and for her last Will and Testament in the presence of us present at the same time who at her request in her presence and in the presence of each other have hereunto set our hands as witnesses